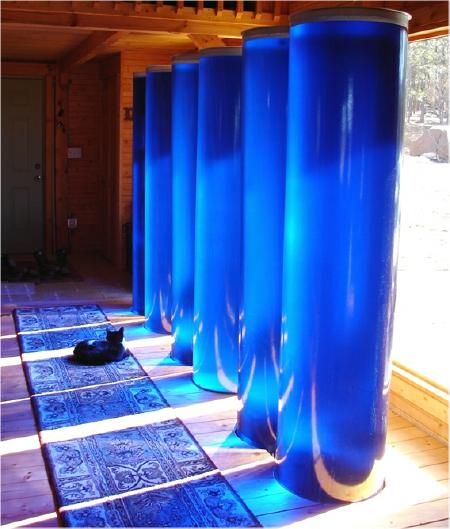 The circulatory system functions like those of living animals, including humans, which contain an extensive network of tiny blood vessels near the surface of the skin that dilate when we are hot. This allows more blood to circulate, which promotes heat transfer through our skin to the surrounding air.

Similarly, the new window-cooling system contains an extensive network of ultrathin channels near the "skin" of the window—the pane—through which water can be pumped when the window is hot. The channels consist of long, narrow troughs that are molded into a thin sheet of clear silicone rubber that, when stretched over a flat pane of glass, create sealed channels.

"The water comes in at a low temperature, runs next to a hot window, and carries that thermal energy away," said lead author Benjamin Hatton, who conducted the research while a postdoctoral fellow in the Aizenberg Biomineralization and Biomimetics Lab at the Harvard School of Engineering and Applied Sciences (SEAS) and the Wyss Institute for Biologically Inspired Engineering at Harvard.

The group is led by Joanna Aizenberg, the Amy Smith Berylson Professor of Materials Science at Harvard SEAS, Professor of Chemistry and Chemical Biology at Harvard, and a Core Faculty member of the Wyss Institute. Aizenberg is an expert in the development of engineered materials that mimic those found in nature.

Today's insulation and construction methods do a good job keeping heat from leaking through walls, but heat transfer through glass windows remains one of the major stumbling blocks to energy-efficient buildings. In large part, that is because the molecules in glass absorb the sun's infrared light, heating the window, which heats the air inside the building significantly.

The idea to cool glass windows when they get hot emerged from work on microfluidics by Don Ingber, founding director of the Wyss Institute and Professor of Bioengineering at Harvard SEAS. Ingber is also the Judah Folkman Professor of Vascular Biology at Harvard Medical School and Boston Children's Hospital.

Microfluidic devices circulate fluids through tiny, ultrathin channels and are typically used to build small devices for laboratory research and clinical diagnosis. In contrast, Ingber's team developed an innovative method to build large-scale microfluidic devices for organ-on-chip applications. They first use a vinyl cutter—a computer-controlled device that cuts intricate patterns on large vinyl sheets—to create a plastic mold. Then they pour liquid silicone rubber into the mold, let it solidify, and remove it, which creates the thin sheet imbued with long, narrow troughs.

Hatton and his colleagues then created and tested a four-inch-square microfluidic windowpane. They found that when these channels were filled with water, they were also transparent to the eye—which, of course, is important in a window.

They then used a heat lamp to heat a pane with this vasculature to 100°F—as hot as a window might get on a sunny summer day. Using a special infrared camera, they showed that the circulatory system could readily cool the pane.

The team then worked with Matthew Hancock, an applied mathematician and visiting scientist at the Broad Institute of Harvard and MIT in Cambridge, Mass., who developed a mathematical model that predicts how the circulatory system would perform on normal-size windows. Pumping just half a soda can's worth of water through the window's circulatory system would cool a full-size window pane by a full 8°C (14°F), they calculated. The energy needed to pump water would be far less than the heat energy the water absorbed. This suggested that installing the cooled windows throughout a building would generate a big net win.

Next, the researchers plan to team up with architecture researchers to meld their mathematical model with existing architectural energy-modeling software to see how much energy microfluidic windows would save if installed over an entire building.

This work was funded by the Wyss Institute. In addition to Aizenberg, Ingber, Hancock, and Hatton (who is now an assistant professor of materials science and engineering at the University of Toronto), the research team included: Ian Wheeldon, a former postdoctoral researcher in the Wyss Institute and the Harvard-MIT Division of Health Sciences and Technology (now an assistant professor in chemical and environmental engineering at the University of California, Riverside), and Matthias Kolle, a postdoctoral fellow at Harvard SEAS.

We could be doing so much more with our windows. Why not use them to collect solar energy? EU-funded researchers are developing an innovative solution to do just that. Their concept is based on thin layers of running water in the glazing, which is also designed to help maintain comfortable indoor temperatures and block out excess sunlight..... 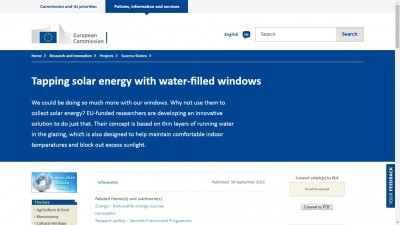 "Windows With Water Reduce the Need for Cooling by 70%

We all know double glazing drastically reduces heating and cooling costs as well as noise levels. Still, glass heats up in the summer which is far from attractive when you’re inside a glass building. However, nobody wants to give up the beauty of such building from the outside nor the luminosity they provide inside and so glass is becoming more and more popular in modern architecture. The fact that glass heats up causes big problems in hot countries like Spain, especially in the summer, and leads to more and more air conditioning, not a very eco installation.
Luckily it seems innovation has entered those glass facade windows by adding water. A group of researchers at the Polytechnic University in Madrid (UPM) are developing a system to cool the windows by adding a 1cm slot through which the water circulates on the inside to absorb the heat of the sunbeams. The spin-off project of the UPM is called Inteliglass. With its installation, buildings with glass facades could save up to 70% on air conditioning. Contact Inteliglass for more information: creacion.empresas@upm.es (Tel: +34 91 336 59 71). via::Habitat Futura ::UPM Inteliglass (in Castilian)"